It was 5:30, I was finally off of work and faced with a crucial decision. I could be responsible and go to the mandatory training that was starting just across the pool deck, or make up the training, go home to eat Blue Bell, and watch the Fighting Texas Aggies Basketball game. If I stayed for in-service I would be home in time to catch most of the second half, but ice cream sounded heavenly and I was not about to become a 2%er*.

So I went home, grabbed my official ice cream eating spoon and ate my delicious dinner directly from the container like a real man. In between bites of ice cream I pulled up the Texas A&M game on my phone and eagerly waited for tip off.

Throughout most of the game I intensively watched as the Aggies fumbled around the court missing shots and turning over the ball. Constantly yelling at my phone and cheering on my team because that does in fact effect the outcome of the game. 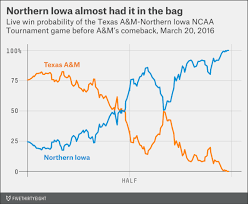 less than a minute left in the game the Aggies were down by twelve points, and according to computer statistical models our chances of winning were well beyond 3 standard deviations of the mean (0.01% for you non statistics majors). I had given up all hope of winning and reluctantly turned the game off as I gloated on the decision I made to skip the training at work and watch the Aggies lose. (diagram courtesy of fivethirtyeight.com)

I packed my lunch and backpack as I was preparing for the next day, and waited for the upset alert notifying me that Texas A&M lost to some obscure school in Iowa. After I had completely packed all my stuff I checked my phone but still had not received the alert. So I open my March Madness app to see what the holdup was. This is when I noticed that the score was tied, with zero minutes left in the second half. Perplexed and dumbfounded by what I was seeing, I pulled up the live stream and watched as the commentators were analyzing how Texas A&M pulled off the amazing feat.

I was immediately filled with regret knowing that I had turned off the best comeback in basketball history, and had given up on my Aggies. Luckily (or Unluckily for Northern Iowa fans) the men of Texas A&M basketball did not give up on themselves.

Pulling off what they did was impossible, but they did not buy into that. A&M could have easily relaxed those last 30 seconds and conceded the loss to Northern Iowa. But they choose to fight until the bitter end. And fight they did. As they enabled a hard full court press that tore apart Northern Iowa and forced them to turn the ball over underneath the A&M basket four times. Allowing the Aggies to have the insane and impossible comeback and earn a spot in the Sweet 16.

So I challenge you not to be like me, not to roll over and accept defeat when the outlook is grim. But rather fight against all odds and never give up until the clock (metaphorical or literal) strikes zero to keep trying until it is truly over. Because the cool thing about success is that you only have to do it once. As always; make good choices, share if you liked what I said, comment if you have something to add, and I’ll see you on Thursday.

This post is a republish of an article I originally wrote for Good Bull Hunting. Click the link if you want to read the vintage version.

*A term used to describe a loser that goes to Texas A&M and has zero school spirit.