Before I start this blog I am going to give you a statistic and I want you to remember it; 3 percent of Americans wait until marriage before having sex. I couldn’t find any studies on people waiting until engagement, probably because the type of people that wait that long wait the whole way until they are married. So for all practical purposes I’ll say about 3 percent of people wait until after they are engaged to have sex. Remember this there will be a test later.

The other day I was driving and listening to some hardcore gangsta rap or maybe it was Bach I can’t remember. Whatever I was listening to began to fade out and was replaced by the Radio DJ. He began to tell some absurd blip of pop culture information that normal doesn’t catch my ear. However, this time what he told me was so crazy, seemed so untrue that I had to fact check him. And after a “lengthy” afternoon of research I can sadly verify his clams that according to a Netflix survey, 51% of its users say that sharing their Netflix password with their significant other means they are in a serious relationship. Which is fine and dandy. Passwords should be secret that’s the point of them. But then the study went on and said that 17% of its users would wait until engagement until sharing their Netflix password.

Hearing this I immediately thought of the popular, “dating,” ritual the young people of America partake in. I use quotes because calling Netflix and Chill dating is like calling Ramen a meal. At the end of the night no one likes the decision they made, and wake up feeling more empty than before. 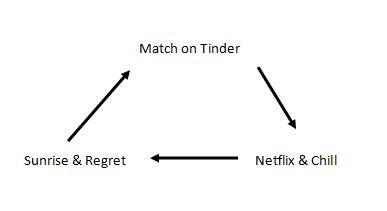 The Netflix is now a more important relationship milestone than the Chill (remember the 3%) Now for those of you that do not understand Snapchat or Twitter, and are thinking, “Chill? Isn’t that what the kids these days’ call spending time with friends? Of course a password should be more protected than visiting with friends. I just read a Facebook article about password protection and how not to believe the pop-ups I get when I open the Internet Explorer.”

When I say chill I don’t mean chill. I mean coidus. Netflix and Chill is code for spending 20 minutes selecting a movie that will only be watched for 5 minutes and then after that will merely be playing in the background as various other activities take place.

So in today’s society a simple password that can be changed if (more likely when) you break-up with someone is more of a relationship milestone than the most intiment activity you can share with another person. Heck, changing your Netflix password is probably the easiest part of a break-up. All you have to do is simply come up with a string of characters. They remember themselves so you only have to log in once, and Netflix doesn’t require you to have a capital letter, lowercase letter, number, special symbol, and it be 48 characters long. A new Netflix password is a lot easier than awkward conversations as you exchange the things y’all left at each other’s house. And it is even easier than the really awkward conversation you have a few weeks after a one night stand from Tinder that you accidentally impregnated. So why would you hold eight characters more sacred than sex?

So I challenge you to evaluate the things that you hold dearest and make sure that they are actually worth the value you hold it at. Because sometimes what you think is important is not all that special. As always; make good choices, share if you like what I said, comment if you have something to add, and I will see you on Saturday.

Join 56 other followers
Follow Thoughts with Thomas on WordPress.com